Ideally, one would not need to do any preparation of the tape prior to transferring it. However, our research showed that many in the field experiences problems when playing back 1/2" tapes. Frequently the signal deteriorated within minutes into a screen of "snow", as the heads clogged. Our tests confirmed this. Even more serious than clogged heads is the danger that the tape could stick to the head drum or another part of the tape transport. Because 1/2" open reel equipment is as valuable as 1/2" open reel tapes, it is not worth taking a chance damaging the equipment. We decided that 1/2" tapes might require some preparation.

With 3/4" U-matics, transfer without preparation is often worth trying first because it may avoid running the tape needlessly. The tapes are often not as old, and thus have not deteriorated as badly. Knowing the age and condition of the tapes will help make this decision. Also, parts for U -matic equipment are more readily available than for 1/2" decks.

We determined that we would need to prepare the tapes, and went about researching the three methods. We also began to get calls offering advice.

A number of technicians reported luck with various wash solutions. Technicians from both Ampex and 3M recommended baking tapes to facilitate playback, because the heat revitalized the binder, reducing the loss of magnetic particles.

BAVC decided not to explore either of these two methods. They were comparatively labor and time intensive without being conclusively better (or worse) than other methods. BAVC was also concerned that washing and baking could damage tapes, making any future transfers impossible.

For these reasons BAVC decided to work first with tape cleaning machines, postponing any experimenting with other methods until after we had implemented the machine method.

BAVC first became aware of using tape cleaning machines through an article in its newsletter Video Networks. In 1985, Sharon Grace of the San Francisco Art Institute reported using a machine manufactured by Recortec to clean and transfer 1/2"1/2" open reel tapes. The Grace article appears on the Video History Web at Preservation- Texts. Also, Lowell Moulton, a Sony engineer and BAVC Board member, had provided BAVC with a copy of a 1982 NASA publication, Magnetic Tape Recording for the Eighties (Reference Publication 1075). It described the design elements of various tape cleaning machines. The cleaning machines had been developed primarily as a tool for maintaining data tapes, a prevalent data storage medium at the time. 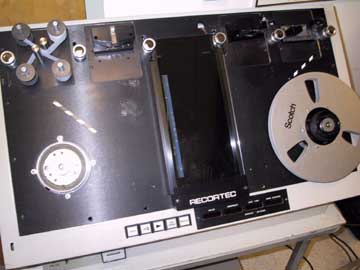 We decided to use a Recortec machine for several reasons. Recortec had a proven track record of cleaning data and videotapes in a variety of environments, and the machine was documented in the NASA publication. The machine method was comparatively fast and the tape transports were designed for careful tape handling. Also, Recortec was located l fewer than sixty miles from BAVC in San Jose, CA.

Using the Recortec and the RTI

The tape-cleaning machine that BAVC uses, the VTE-200, has a left and right reel. Each reel can be a supply or take-up reel, because the machine can clean both left-to-right and right-to-left.

The cleaning modules are located between the two reels. 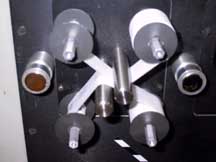 The module closest to the reels contains cleaning tissue on spools. The take-up tissue spool is driven by a clock motor, at a very slow speed, to prevent re-depositing debris that has already been wiped from the tape. 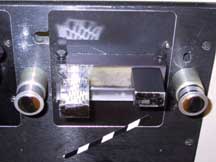 The module of slotted metal grids resembles the grids on an electric shaver, and has a vacuum under the grids to remove debris from the tape path.

The final module is a sapphire block. 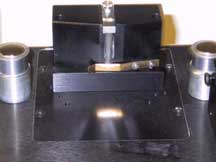 In the middle of the tape transport the tape passes through a vacuum chamber. 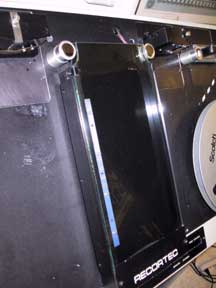 Its most important function is to minimizes tape tension as the tape travels through the tape path. It also removes debris from the tape path.

The Recortec machine can be configured with different modules in different locations in the tape path. The configuration BAVC settled on was developed through experimenting with donated 1/2" open reels. Through this process the Recortec technicians noted that videotapes were often not handled as carefully as data tapes - perhaps because of the difference between the typical cleanliness of a mainframe computer room and the more casual environment of a media arts center. Therefore, it was important to choose the method that minimized the possibility of further damage to the tape, even if other methods had other more desirable characteristics, such as durability.

The Recortec cleaning machine has both a desktop and a rackmount model. Both take up a lot of space. BAVC purchased a used desktop model. A rackmount model would be preferable since the rest of BAVC's control room equipment is mounted in 19-inch racks.
How many times should a tape be passed through the cleaning path? Responding to a suggestion from a local conservator, in 1995 BAVC performed a test by running a tape through the Recortec cleaning path 20 times and transferring the tape after 1, 5, 10, 15 and 20 passes.

The results were recorded on a Betacam SP tape, and the same section of the original tape was edited in split screen, video with 1 pass on the left, video with 5 passes on the right. This split screen comparison was created for each of the passes. No noticeable degradation to the video could be detected either visually or by use of a waveform monitor. . There was also no noticeable audio signal loss.

While this experiment showed that we could theoretically run a tape through the cleaning process 20 times, time constraints seldom allow that, and it is unnecessary. One pass on the Recortec machine takes about 5 minutes. Typically 2 to 5 passes is enough to allow us to transfer a tape without playback problems.

Recortec's line of tape cleaning machines is long out of production. However, according to Lester Lee, a technician at Recortec, they still repair and re-furbish the machines, and can also help locate a used machines, or build one to the customer's specifications. They can be reached at 408-928-1480, fax 408-729-3661 or email [email protected].

A web search for tape cleaning machines reveals a number of different companies involved with tape cleaning. Appendix 12.1 contains some information about these companies. 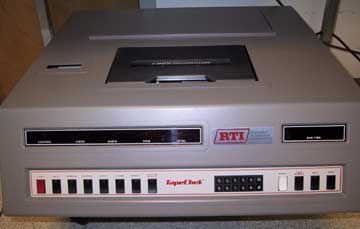 At that time, RTI was the only manufacturer we were aware of making affordable U-matic cassette cleaning machines. However, our purchase of the RTI machine was made with much less research and testing. At the time we were just too busy, and we needed to quickly provide remastering services for clients with U-matic tapes. RTI makes cleaners for everything from VHS to DVCAM tapes. RTI can be reached at 847-677-3000, 800-323-7520 or 818-838-0480; [email protected].

‹ Elements of the Remastering Process up Origination Formats and Machines ›