Another complicating factor in the transfer process is the need to identify the media and the playback equipment. 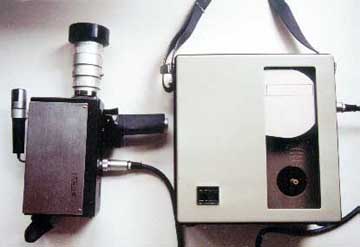 The first 1/2" open reel format was the CV series, made primarily by Sony.

In 1969, the AV series was introduced - the first 1/2" format engineered to an industry standard. EIAJ (Electronics Industries Association of Japan) decks were made by Sony, Panasonic and others. This standard ensured compatibility among manufacturers and permitted tapes made on one system to be played back on equipment manufactured by another company. Ideally a 1/2" remastering facility should have both CV and AV source decks.

For identification of media, see Sarah Stauderman's Video Identification Guide and the Vidipax web site, which has both a media identification guide and guide to equipment. The LionLamb site  has an extensive and detailed survey of many early video formats. The manufacturer's specifications sheets for some of the early tools are located on the Center's Video History site's Tools area, along with images.

You may also find it helpful to browse the contents of Video Preservation - the Basics. The section "Video Terms" contains a basic technical glossary, which is helpful in understanding the problems typically encountered in tape transfers, as well as links to other glossaries on the web.

Issues with skip field and the Sony CV-2100

In the world of 1/2"open reel transfer, most tapes are EIAJ. However, you may encounter "skip field" or CV tapes. The formats are not compatible; a CV tape will not play back properly on an EIAJ- compatible machine. On an EIAJ-compatible deck, a "skip field" tape will play back sound correctly but video will be skewed and out of sync. While the video is present, it is out of sync. If you encounter a tape which has good audio but noisy video, then the heads on the playback deck are probably dirty.

You may encounter a tape with EIAJ recorded on one part and "skip field" recorded on the rest.

Tape players/recorders are electromechanical devices. They function by mechanically pulling a magnetic tape over magnetic heads. 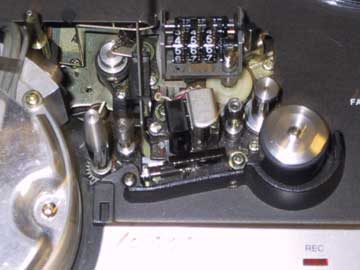 One of BAVC's source decks is the Sony CV-2100, a 1/2" open reel videotape player. The CV-2100 plays videotapes that are recorded with "skip-field" equipment.

The NTSC signal, the standard for video signal recording in the U.S., is made up of 30 video frames per second, each frame is constructed of 2 fields of video. There are 60 fields per second in an NTSC video signal.

A CV-2100 offers special challenges, there is no BNC or RCA connectors for video output. What to do?

There is an 8-pin EIAJ connector on the CV-2100. This connector effectively "bundles" both input and output signals for video and audio as well as ground into a single cable. In the early 1990s, many studio monitors and video recorders still used this type of connector in the early 1990's to reduce the tangle of cables in a studio.

To send the video signal out of the CV-2100, I ordered an 8-pin EIAJ connector from Comprehensive Video in San Francisco. I cut off one BNC end of a short BNC cable and soldered the cable's conductor to pin 2 of the EIAJ connector, and the cable's metal sheathing (layer just beneath outer plastic coat) to pin 6 for a ground.

I keep this 8-pin EIAJ to BNC cable short so it is portable and functions like an adapter. A barrel connector and a longer BNC cable complete the video connection.

The audio connector on the CV-2100 is a mini plug and the signal is not +4 db. If the record machine has +4 db audio (Beta SP, Digital Beta, one inch, etc), the audio will need to be matched.

I've also had problems with video signal termination coming directly off of the CV-2100. Termination means to complete a circuit by connecting a resistive load to it. A video termination is typically a male BNC connector which contains a 75 ohm resistive load. When there are looping inputs, any unused looping input must be terminated in 75 ohms to ensure proper signal levels and to minimize reflections.

An example is a video with a close up of a human face. Directly off the CV-2100 I could distinguish few facial features. To address this, I did an experiment. I transferred the skip-field signal directly onto a 3/4" U-matic tape. On the Sony VO-9850 U-matic recorder I used, a, the video input level can be adjusted. I turned this all the way down. I then transferred from the U-matic through a time base corrector (the Sony BVT-810), again lowering the video signal.

The results astounded me. I could make out freckles and hair strands. The face was very clear and detailed. 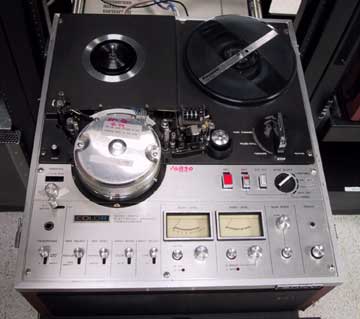 Most of the 1/2" open reel tapes that are transferred at BAVC are played back on this machine. BAVC has two AV-8650s.

As far as connectors go, the AV-8650 is modern compared to the CV-2100. Audio out is still a mini plug, but the video out is either a UHF or BNC connector. A UHF to BNC adapter is readily available at electronics stores such as Radio Shack.
One important feature of the AV-8650 is that the video input will also serve as a sync input. With a "sync in," you can run the video signal of the AV-8650 through a time base corrector (TBC) that is not full frame, such as the Sony BVT-810.

The audio connector on the AV-8650 is a mini plug and the signal is not +4 db. If the record machine has +4 db audio (Beta SP, Digital Beta, one inch, etc), the audio will need to be matched.

Even though the AV-8650 has a "color/BW" switch, I feel that it seldom pays to switch from color. Often tapes have several segments edited together. Some may be color and some monochrome. Unfortunately, if you leave the switch in color the monochrome image may have sparkles of false color.

The only way to avoid this is to attempt to change the color switch on the fly. Perhaps the best "workaround" is to record in color, accepting false color artifacts. If this tape is used to create a new program, the program color can be adjusted in post-production. 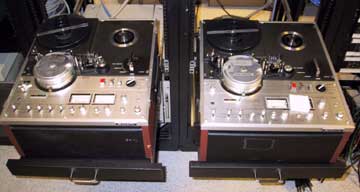 The two AV-8650s are mounted to provide a simple rewind station. BAVC's CV-2100 doesn't rewind tapes. We took this feature into consideration when we designed the ergonomics of the remastering center.

With 1/2" open reel decks the information is recorded on the diagonal. This is referred to as helical scan. The supply reel sits higher than the take-up reel and the tape drops in its path from the supply reel, past the video heads on its way to the take-up reel. This drop in the path as the tape is moving causes the information to be recorded on a diagonal on the tape.

We have our two EIAJ 1/2" open reel players mounted next to each other on the same level. With this configuration we can rewind tapes without passing them through the video player's tape path.

The Sony BVU-800 is a 3/4" U-matic tape machine originally designed for the broadcast market. Industrial models have part numbers that begin with "VO," the most popular models are the VO-5850 and VO-5800.While Sony also made many U-matic models for the industrial market, the broadcast models are preferred because of two significant differences. First, Sony added a visible head switch glitch in the output of the industrial U-matics. This head switch looks like 4 lines with skew errors at the bottom of the image. Also, the industrial U-matics may exhibit vertical picture rolls if address track time code is present on the tape, although an engineer can correct this.

U-matic machines have a BNC for video out. U-matics also have a U-matic dub input and output connector for video, essentially a precursor to the S-Video connector introduced with Hi-8 and S-VHS. This connector separates the luma ("Y") signal from the chroma ("C") signals, providing a quality boost for transfers from the BVU-800 to equipment that also has dub connectors. Usually that is another U-matic tape machine, although some TBCs have a U-matic dub input. It's important to note that while early JVC S-VHS machines used the same connector for the S-Video signal, these two signals are not the same.

The BVU-800 has XLR audio connectors. The audio output is +4 db, and will be compatible with broadcast recording machines.

Transferring U-matic tapes is usually straightforward, but Problems can occur. A very early U-matic tape that we were trying to transfer played perfectly for five minutes of the 30 minute program, and then began to rewind. After trying a test tape to verify that the tape machine was working correctly, we looked at the tape at that spot. You can access the tape on a cassette with a little trap door button somewhere near the front of the tape. I was worried that the tape would be crinkled or twisted at that spot, and not proceed along the tape path. What I found at that spot was clear tape; the magnetic material had stripped away from the tape for about a quarter inch.

To play the entire program back we placed a piece of opaque tape over the infrared light sensor. As long as the tape was in place, the light would never "see" the mirror. We removed the top of the machine in order to carefully monitor the tape progress during playback, because we had disabled the end-of-tape function. With this function disabled, the machine could pull the tape right off the reel at the end of the tape.

Time code signal on U-matic tapes is a variable. Not all U-matic tape is time coded. If time code was recorded in the field, it was recorded on the address track, a digital track that shares tape space with the video signal. If the tape was post-coded, the time code was usually on one of the audio tracks, typically track 2. Eventually, Sony marketed a modification to BVU models that added a switch - audio 1, audio 2, or address track. With this, the time code on the tape can be read regardless of where it was recorded.

If time code is being transferred with other signals, it should go through a time code reshaper. This device guarantees that time code will have the proper waveform and thus, will be read correctly. At BAVC, the time code generators in the facilities control room which houses the remastering center are used to regenerate and reshape time code from U-matic tapes. This may not be as much of an issue as time passes.