Early Portable Video
Portable video technology was first introduced to the United States in about 1965, when SONY first began to market consumer television equipment. The cost of the system was less than $3,000, within the range of individual or collective ownership. This advance marked the first time that television production technology was accessible to individuals outside the aegis of corporate sponsorship. It is significant too because television permits recording and immediate display of information, analogous to audio recording technology. With the imaging technologies of film and photography, the medium with which information was recorded required processing before it could be viewed. This immediacy became an important factor in the development of the medium, both in the hands of artists and social and political activists.
The portapak as it became known was a large and rather cumbersome video tool by todayﾒs standards, capable of recording only in black and white. The early tools were not compatible with each other in terms of signal standards; a tape made on a machine manufactured by one company could not always be played on a machine made by a competitor. The system also required a separate playback machine for display of the tapes.

The CV portapak consisted of a black and white camera with a zoom lens. It was connected with a cable to a separate recording deck and could operate off 110 AC or by battery. An external microphone was mounted on the top of the camera.

The camera monitored the image through the viewfinder and presented it electronically on a small CRT or television. The ten pin cable connecting the camera and deck carried the video and audio signals, along with electronic timing information signals. The system was powered either by 2 internal batteries or by an external AC adapter. Because these early decks were not able to play back prerecorded tapes, there was no rewind capability. The tape was rewound on the portable deck manually, with a lever made specifically for that purpose.

The system was able to record a maximum of 20 minutes of video and in-sync audio on 1/2" tape. The information was laid down on the tape in a diagonal manner because of the drop of the tape in its path past the recording heads which were spinning in a horizontal plane; these systems were referred to as helical scan formats for this reason. Each head recorded one field of information; both fields together composed one frame of video. On the early systems these fields were randomly interlaced, which meant that the lines composing the odd and even fields were not scanned alternately. Later systems used 2:1 interlace. The tape was made of a base material coated with magnetic particles which recorded the electrical signals generated by the camera and microphone, along with certain timing or synchronization and control information.

To screen the prercorded information, the tape was played back on a playback deck, which was often connected to an ordinary television receiver through the antenna terminals of the set, converting the video and audio to RF information. The video and audio signals could also be input directly to a monitor. The playback deck was not battery powered, thus not portable, and offered basic forward and reverse capabilities. It was not possible to "still" the image accurately, or proceed in slow backward or forward motion.

As soon as it was introduced in the US, the portapak began to be employed by artists coming to video from a vast variety of practices painting, sculpture, dance, music, photography and film. The history of video as a practice encompasses many disciplines: art, science, technology, mass media and communications, linguistics, political and social issues. It is frequently delineated, in part, through the tools available to the artist at a particular juncture. The earliest video/television tool to which artists had access was the portapak, which arrived in the late 60s at a time of political dissent and social activism. A media production tool which up until then had been available only to large broadcast corporations was placed in the hands of individuals for personal use, a radical concept at the time. At the same time there was growing interest on the part of foundations such as the Rockefeller Foundation and public funders, notably the recently formed New York State Council on the Arts in artistsﾒ uses of video. Many of the video collectives which were organized around alternative uses of media received support from these funding institutions.

Although the portapak as a device was used by those approaching the video medium as an art practice as well as by those whose concerns were the use of the tool as a means of social and political action, the tool is probably more closely associated with those individuals and groups who used it to produce documentary tapes. However, in the earliest days of independent video, these distinctions were really not made by the practitioners. The immediacy of image and sound capturing, and the fact that individuals could produce television were initially the overriding factors among all users.

Because of the strictures placed on production by the technological capacities and limitations of the equipment, as well as because of the social milieu and the modernist art practices of the time, the documentary works began to redefine the boundaries of what was then known and accepted videography. The tapes themselves were long, and for the most part unedited except in-camera; single shots were also long, frequently with hand-held camera movements and a strong sense of immediacy. Often of inconsistent quality technically, the tapes dealt with subjects never before been seen on video. Presentation of "television" in an arts context at alternative spaces and museums was very much in opposition to the customary notion of television as "furniture" in the domestic environment, and forced audiences to view video imagery from a different perspective.

Those looking at this new medium as an arts practice, began using the portapack to explore more formal characteristics of the medium: the properties inherent to it - the fact that the display was an emitted light phenomenon; the textural qualities of the black and white "pixilated" image; the timing structures of the medium as ways of constructing and controlling imagery; the idea that TV was cinematic, but that each "frame" was ephemeral and constructed through time. Unlike film, television frames do not exist as a series of single whole images played back quickly enough to give the eye the perception of motion. Television images are in a constant process of construction and deconstruction because of the scanning process by which the imagery is recorded and displayed. The fact that video and sound were ultimately electronic signals suggested that not only the display of the image could be reworked, as with the early experiments of Wolf Vostel, Nam June Paik and others with prepared TVs, which often distorted the displayed imaged by magnetic or simple electronic means, but that the signal itself could be defined in ways which could produce images unmediated by lenses and cameras. Individual artists and technicians singly and in collaboration researched new image processing tools: keyers, colorizers, synthesizers and untlimately computer-based systems. Because of the expense of machines necessary to allow the direct input of these prerecorded tapes into these synthesizers, most artists working in the early 70s rescanned their portapak generated tapes, playing back the tape on a monitor and pointing a camera at that monitor. The camera, providing rescanned images from the tape, could then be used as an input to the synthesizer, and the imagery colorized or otherwise manipulated.

Chronology of the Portable Videotape Recorder

Nam June Paik buys first portapak in New York, tapes Pope Johnﾒs visit to the city, and show the tape at the Café Au Go Go in Greenwich Village.
source: David Ross and Wulf Herzogenrath "Chronology for US and Europe" and multiple others

Sony CV-2100 was listed on Sony product sheet. This also was a console model, advertised as having "true portability, weighing only 49 pounds".
source: Product sheet, undated. 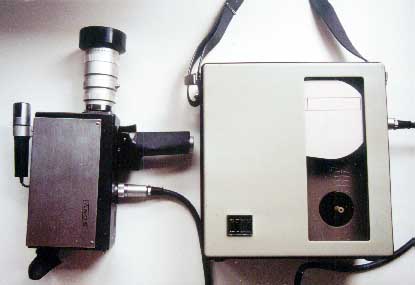 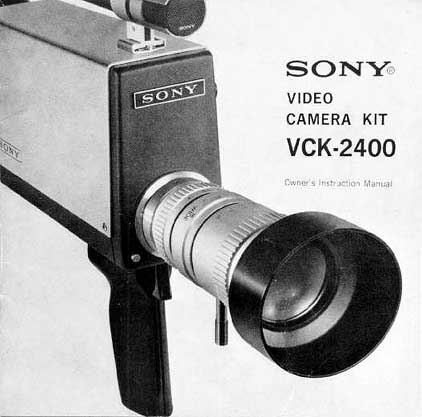