For a PDF of the original document Raster Manipulation Unit: Operation and Construction (1980). Includes a step-by-step description of process of modifying a CRT.

Description
A raster manipulation unit or 'wobbulator' is a prepared television which permits a wide variety of treatments to be performed on video images; this is accomplished by the addition of extra yokes to a conventional black and white receiver and by the application of signals derived from audio or function generators on the yokes. The unit is a receiver modified for monitor capability; all of the distortions can thus be performed either on broadcast signals or, when the unit is used as a monitor, on images from a live or prerecorded source. Although the image manipulations cannot be recorded directly, they can be recorded by using an optical interface. The patterns displayed on the unit are rescanned; a camera is pointed directly at the picture tube surface and scans the display. The video signal from this rescan camera is then input to a videotape recorder for immediate recording or to a processing system for further image treatment. The notion of prepared television has been investigated by a number of video artists and engineers; this particular set of modifications was popularized by Nam June Paik.

The distortions performed on the image result from the actions of audio signals on the yokes. Audio signals which are periodic and regular, such as sine or square waves, are normally used when treating a video image; these signals are derived from an audio or function generator. However, any audio signal source may be employed; these devices include audio synthesizers as well as more conventional components such as audio tape recorders, tuners, microphones or phonographs. These types of signals are most evident visually when used in conjunction with the horizontal or vertical collapse functions which reduce the raster to a horizontal or vertical line. These audio signals cause the line to distort in direct correspondence with changes in the audio signal; often the frequencies present in this type of signal are such that the distortions produced by their actions on a complete image are not very noticeable.

The unit is also capable of reversing the raster around the vertical or horizontal axis, producing images which are reversed left to right or top to bottom in orientation. The raster reversal in combination with audio treatments generate an almost endless series of patterns which are highly controllable. The unit can be used as a normal receiver or monitor end has raster reversal and collapse capabilities with image manipulation functions. It can be utilized in a single camera system or a multiple camera system with or without additional components such as keyers to produce greater versatility in the creation of images.

The normal small yoke on the receiver is an electromagnet; when an electrical current is passed through the small yoke on the receiver it generates a magnetic field which deflects the electron beam in the CRT in a regular pattern of horizontal lines called the raster. The scanning process has both horizontal and vertical components. The yoke wires have been extended to two three-position switches. When the raster reversal switches are in the normal position a raster with the customary left to right and top to bottom orientation is achieved. By reversing the direction of the electric current through this small yoke on the receiver the raster is reversed in either its top-bottom or left-right orientation or both simultaneously. This occurs when the switches are in the reverse positions. The normal scanning operation is actually reversed in orientation; the electron beam in the horizontal scanning process is deflected from right to left rather than left to right, while in the vertical scanning process the beam is deflected from bottom to top rather than top to bottom. When both switches are in reverse positions, the beam is deflected bottom to top and right to left simultaneously.

If current is removed from the vertical operation, one horizontal line is obtained because the electron beam is scanning to the left and right but it is not being drawn downward. When no current is passed to either the horizontal or vertical systems the electron beam is not moving either horizontally or vertically, and one point is produced. It is important to note that when the raster is collapsed to a point or line, the contrast and brightness controls on the receiver/ monitor should be turned down to prevent permanent burning of the CRT.

The audio generators provide audio signals to the mono and stereo amps in much the same way that a tuner or turntable provides a source of periodic or continuously repeated, regular waveforms. They are normally used when distorting a full raster. Frequencies which are multiples of the vertical sync rate of 60 Hz produce the most obvious and symmetrical distortions; examples of such frequencies include 60 Hz which is the vertical sync rate multiplied by 1, 30 Hz which is one half the vertical rate or 60 Hz x .5 and 90 Hz or 60 Hz x 1.5. This range of frequencies is usually found on audio generators. It is possible to use an audio tape recorder, tuner or phonograph as a source for audio signals rather than an audio generator; in this instance the signals which will distort the raster are not necessarily periodic and may contain a wide range of frequencies, same of which may have little or no visible effects on the raster. These non-periodic waveform sources produce more evident distortions if the raster is collapsed first to a horizontal or vertical line. In this case the line will visibly respond to most of the frequencies found in signals derived from audio tape decks, microphones, tuners or phonographs. The lines also respond to audio signals originating in the audio generators. The notions of these lines caused by these types of audio signals have been referred to as 'dancing patterns' by fan June Paik.

All electrical signals have a waveform, indicating changes in voltage measured through time. Some signals have a periodic or repeating, regular waveform while others produce random or non-periodic waveforms An oscillator is a device which produces a regular and periodic waveform; for example, an oscillator may produce a sine, square or triangle wave. A waveform generator usually puts out one defined waveform; an example is a square wave generator. These devices are frequently used for test purposes in the electronics field. An audio or function generator may permit selection of one of several waveforms, for example sine, square and triangle. These devices may also offer control over the frequency or amplitude or they may be capable of locking to an external signal. These devices are available commercially or in kit form. Oscillators may also be constructed from discrete components. Any of these devices may be utilized with the raster manipulation unit, but it is desirable to have at least two different waveforms available.

An oscilloscope is a device which visually displays the waveforms as a change in voltage through time; the shape is diagrammed with the X or horizontal axis representing time and the Y or vertical axis representing changes in voltage. The term periodic refers to a waveform wherein a regular, repeating pattern is observable as the voltage changes through time; sine, square and triangle are all files of periodic waveforms. Figure 1 indicates the shapes of different waveforms.

A waveform may begin at any point but when it returns to the point of origination the waveform has completed one cycle. Cycle refers to the completion of one rise, fall and return of the signal. It is important to note that the waveform may pass through the particular voltage at which it began a number of times before one cycle is completed. For example, in Figure 2 the sine wave begins at voltage = 0 and passes through this point value exactly half way through one cycle before ending at this point one second after beginning. The time in which it takes for one waveform to be completed is referred to as the period of the waveform. The number of times this waveform is repeated in one second is called the frequency of the waveform; frequency refers to the speed of the signal. The umber of cycles the signal completes in one second is measured in cycles per seconds expressed as Hertz or Hz. Figure 3 illustrates this. The range of human hearing is between 15 Hz and 20,000 Hz or 20 KHz; frequencies below 15 Hz are subsonic while those above 20 KHz are ultrasonic. Audio generators commonly put out a range of 310-30,000 Hz approximately those frequencies within the range of human hearing. The amplitude of the signal refers to the peak voltage which the signal attains. It refers to the strength of the signal and is measured by the height of the waveform expressed in volts. 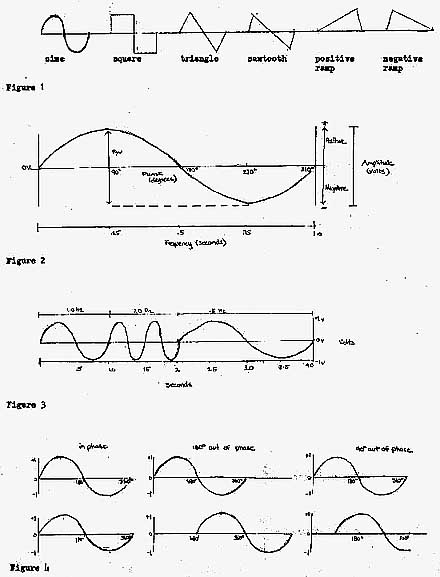 A sine wave is a plot of the trigonometric function and is the most basic of waveforms; all other complex waveforms can be constructed from sine wares. A sine wave consists of a fundamental and harmonics shown in Figure 6. In a square wave the voltage is either on or off, both for equal periods of time. A square gave can be constructed by the addition of all odd harmonics to the fundamental; as each odd harmonic is added, the shape of the wave approximates more closely a square wave. All harmonics of the square wave are in phase. A sawtooth wave is built up from both even and odd harmonics; all harmonies of a sawtooth are also in phase. All truly symmetrical waveforms are built only from odd harmonics; a sawtooth wave is not truly symmetrical because it rises linearly with time and then drops to its lowest voltage, but the time increments for rise and fall are unequal. A triangle wave rises and falls linearly with time, and the rate of change for both the increase and decrease periods is equal. Fourier's theorem establishes this primary relationship of all periodic waveforms to a sine wave and states that air periodic waveform is composed of the addition of sine wave harmonics. 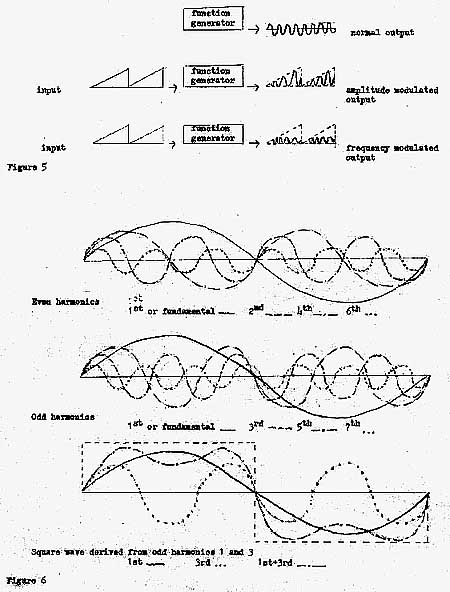 Figure 7 indicates the basic configuration of the raster manipulation unit. 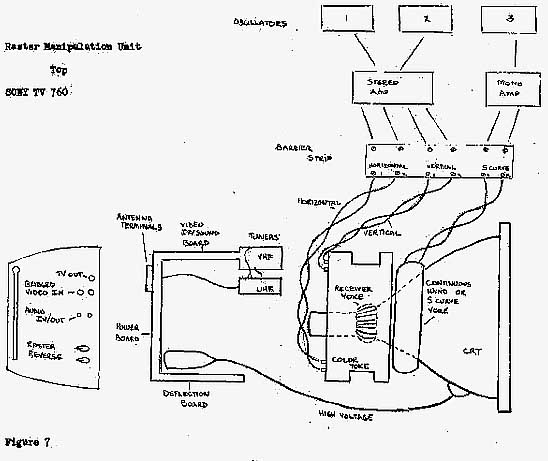 Image Vocabulary
The following is a list of suggested procedures for initial use of the raster manipulation unit. It is helpful to charge one control variable while maintaining all other variables constant; this procedure will assist in an orderly investigation of the parameters of the system. It should be noted that this description uses only the sine wave function of three oscillators; if square or triangle waves are available, proceed with each separately axed then combine waveforms.

Initial control settings are as follows:

The use of one sine wave oscillator connected to the horizontal portion of the large yoke with a frequency of 60 Hz produces an even sine-shaped bending of the raster. Figure 9.

By collapsing the horizontal portion of the raster, a sine wave along the vertical axis is produced. Figure 10.

Two vertically oriented sine waves 180° out of phase are produced if the oscillator frequency is set to 30 Hz
Restoration of the horizontal portion of the raster produces two images moving in opposite directions. Figure 11.

The use of one oscillator connected to the vertical portion of the large yoke with a frequency of 60 Hz produces a raster compressed on top and bottom and elongated in the center section. Figure 12. 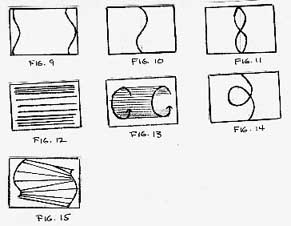 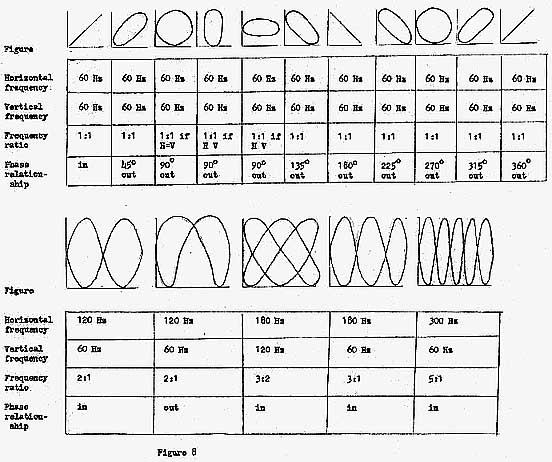 A sine wave oscillator connected to the 'S curve' or continuous wind yoke of the raster manipulation unit with a frequency of 60 Hz produces an image with as S curve containing compression and elongation. Figure 15.

The use of all oscillators simultaneously, the addition of square and triangle waveform capability and adjustment of frequency and amplitude will produce an extensive vocabulary of image treatment. 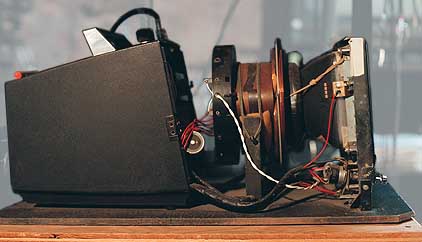