"The fact that TV is produced in sixth cycles is of considerable importance, because sixty cycles turns out to be the way we count time. Time again is always coming up on television. Time. Sixty cycles, sixty seconds, sixty minutes, and so on."
Les Levine, in Gregory Battcock, New Artists Video, 1978

"There is no fundamental distinction between commercial and program, there is only a difference in focus and conciseness, which gives the 30 second commercial its appearance of much greater elegance and style. Both commercials and programs are assembled out of the same syntax: the linear succession of logically independent units of nearly equal duration."
David Antin, "Videoﾒs Frightful Parent" 1975

In video, the image is actually an electronic signal. This video signal has two basic parts: The section containing picture information, and the section containing sync information. Synchronization is derived from the Greek syn and chronos - to be together in time; the term implies that several processes are made to occur together in time at the same rate so that they are concurrent. For a coherent picture to be formed which is easily readable to the eye and brain, the scanning motions of both the image or signal generating device, for example a camera, and the image or signal display device, the monitor, must proceed in an orderly and repeatable manner. The scanning processes in both camera and monitor must begin and end at precisely the same time. The camera and monitor must be synchronized. As the camera begins scanning the objects in front of it, the monitor begins to scan the line which the camera is scanning. As the camera ends the scan line, the monitor must also end that line. When the camera reaches the bottom of the field, the monitor must be exactly in step. Without this synchronization, the camera image and the monitor image will have no relationship to each other. Horizontal sync maintains the horizontal lines in step; without horizontal sync the picture will break up into diagonal lines. Horizontal sync tells the camera and monitor when each horizontal line begins and ends. Vertical sync also keeps the picture stable; without this, the image will roll. Vertical sync tells the camera and monitor when each field begins and ends. Both together are essential to a stable rectangular shape. Sync then can be conceived of as an electronic grid which provides horizontal and vertical orientation to the image.

Each visible line forming the raster is drawn from left to right across the CRT. Before beginning the next line, the beam must return to the left, and this return must be invisible. During this horizontal retrace period, the beam is blanked out; this process and the time interval necessary to perform this function are called horizontal blanking. Horizontal blanking is a part of synchronization.

At the end of each field the beam must return from the bottom to the top of the CRT before beginning to scan the next field. Again, this vertical retrace is not seen. This process and the interval are referred to as vertical blanking. Vertical blanking is also a part of synchronization.

Sync thus indicates a synchronization process. A number of sync pulses are required by an electronic image processing system. Normally these sync pulses are provided by a sync generator, a separate device external to the system which provides the same timing signals to each of the discrete devices within the system which need sync to operate. The single external sync generator provides identical sync signals to all of the cameras within the system.

The vertical sync pulses occur within the blanking interval at the beginning of each field. The first 21 lines of each field consist only of timing information. They do not contain any picture information. They are collectively known as vertical blanking. The following 241.5 lines of the CRT are scanned, and then the beam has traced all of the picture lines. The period of time it takes for the beam to return to the top after each field is scanned is called vertical blanking, approximately 1330 microseconds long, much longer than horizontal blanking.

The vertical sync controls the field-by-field scanning process performed by the electron beam and also maintains the horizontal oscillator in step. The function of the vertical sync pulses is to indicate to the monitor when each field has ended so that the camera and monitor begin and end each field in direct relationship to each other.

The horizontal sync pulses which conclude the vertical blanking interval also help to keep the horizontal oscillator in step during retrace.

This ½ picture line immediately precedes the vertical interval of the even field. The equalization and serration pulses of this field possess the same timing relationships as those of the odd. There is no off-set present.

The vertical blanking period under broadcast conditions contains two additional signals which are used far reference and testing. The first, called the Vertical Interval Reference or VIR signal, is added to line 19 of both fields to maintain the quality of the color transmitted. Certain color receivers are now made which use this signal to automatically adjust hue or color and saturation. The second signal, called the Vertical Interval Test, or VIT signal, is used as a test signal to evaluate the performance of equipment and appears on lines 17 and 18. Other information can be coded into the vertical blanking interval, including program subtitles for hearing impaired individuals. The captions, provided in 1980 by several of the networks and PBS, appear on the screen as text when used with user-purchased decoders. Other systems can provide data such as weather, sports and news reports.

Sync and drive pulses are the timing pulses which keep one or several cameras in step with each other and with the videotape recorder or monitor. In a single camera system, sync can be obtained from the internal sync generator built into the camera. The -video and sync information together are then sent to the deck or the monitor. In a multiple camera system, the internal sync generator in each of the cameras cannot be used to send timing information to the rest of the system. All cameras must receive the same sync signals from a common source at the same time, from a sync generator external to all of the cameras. Video or picture signals from all the cameras are then mixed in the processing system and combined with sync information. This single composite signal, containing both picture and sync information, is sent to the deck to be recorded.

The color sync generator supplies horizontal and vertical drive, composite sync and composite blanking and two additional signals variously called burst or burst flag and subcarrier or 3.58 MHz. Color signals must carry all color information, including the hue, brightness and saturation of the colors, by the use of three primary colors: red, green, and blue. In addition, their structure must be such that they are compatible with black and white systems. A color signal must play on a black and white television with no interference. Color signals must therefore contain both luminance and chrominance information. Luminance conveys the variations of light intensity and is the part of the signal used by the black and white monitor. Chrominance conveys variations of hue, saturation, and brightness.

The subcarrier signal, with a frequency of approximately 3.58 MHz, carries information about color value. This frequency is produced by an oscillator in the sync generator, and is modulated or changed by the color information coming from the color camera to the colorizer in the image processing system. The ways in which the subcarrier is changed convey information about the color, its saturation and hue. For example, changes in the phase of the chrominance signal indicate changes in hue.

In order that changes in phase, for example, and the resulting changes in hue can be identified, a reference signal is required. The burst signal supplies 8 to 10 cycles of the 3.58 MHz subcarrier frequency without any color information. This serves as a reference point to establish the phase relationship of the subcarrier signal before it is modulated and starts to carry color information. The burst signal is located on the back porch of each horizontal blanking pulse. It is not present after the equalization or vertical pulses of the vertical interval. The average voltage of the color burst signal is equal to the voltage of the sync signal. Burst then helps to synchronize color.

The horizontal drive signal occurs at the rate of 15, 750 Hz. Its duration is 1 / 10th of the time it takes from the beginning of one horizontal line to the beginning of the next, or about 63.6 microseconds. Vertical drive occurs at the rate of 60Hz and lasts for about 666 microseconds. Both pulses are sent to the cameras to control horizontal and vertical deflection circuitry, that which dictates the scanning processes.

Line frequency, or 15, 750 Hz, is produced in the camera and monitor by crystals which oscillate or vibrate naturally at the speed of 31, 500 Hz. This rate is then divided in half electronically to produce the required 15,750 Hz frequency.

The field frequency of 60 Hz can be derived by dividing the line frequency by the number of lines (525). These pulses can then be sent to the horizontal and vertical deflection circuits of camera and monitor to insure proper scanning.

Line and field time base stability refer to the precision at which the line and field frequencies operate. Exact operation is essential to the operation of the system as a whole and compatibility between output signals from different systems. The stability of the time base found in small-format recording can be corrected through the use of a time base corrector.

If the horizontal and vertical signals are not locked together in phase but are derived independently, then random interlace scanning results. In this type of scanning, the horizontal lines in each field are not in any fixed position and are not evenly spaced. Occasionally because of this lack of even horizontal positioning, horizontal lines maybe traced on top of each other. This results in the lass of picture information contained in the superimposed lines and a degradation of the picture. This is called line pairing.

During the vertical sync period, it is necessary that horizontal information be supplied or the horizontal oscillator in the monitor may drift. The frequency corrections to that oscillator which are then needed following the vertical sync period may cause flagging at the top of the image. Flagging appears as a bend toward the left or right in the first several lines of the image. 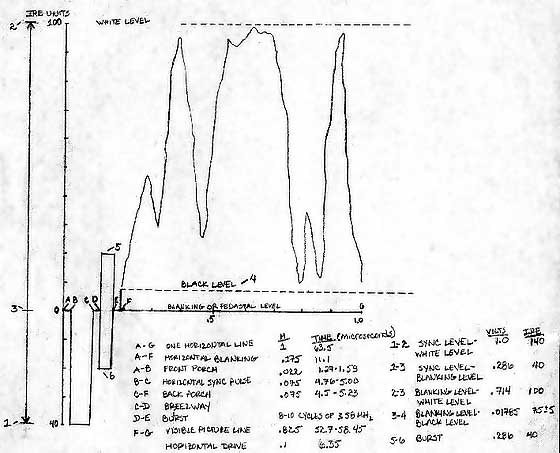