Instruments by Harald Bode and the Bode Sound Co. 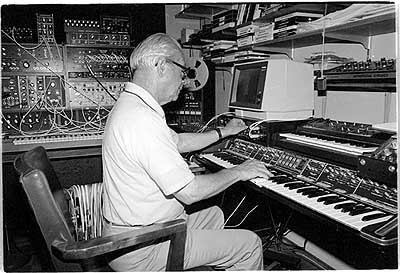 The Bode Vocoder, Model No. 7702 is a sixteen channel Vocoder, comprising a sixteen channel analyzer and a sixteen channel synthesizer section for the transfer of the overtone structure of sounds entered into the Voice inputs onto the sounds entered into the Carrier input. The frequency ranges of these sixteen channels extend from 50 Hz to 5080 Hz. They are indicated on the front panel between the row of output jacks for the control voltages derived in the analyzer channels and the row of input jacks leading to the voltage controlled amplifiers in the synthesizer ch6nnels. The performance of these 16 channels is further enhanced by a high frequency channel extending from 5080 Hz to 15000 Hz, which mainly covers the region of "s" sounds and explosive consonants, and which can be operated in the "direct" mode, in which it functions as a bypass, or in the "switched" mode, in which it is only activated in the presence "s" sounds and consonants.

The availability of this high frequency enhancement channel has proven extremely useful for the processing or copying of percussive sounds entered into the Voice input, such as violin pizzicato, drum sounds, bell sounds, and the like, and thus places this Vocoder into a completely new category of instruments in its class.

The faithful transfer of attack transients is furthermore facilitated by the fast response times of the control circuits in the analyzer section, which is in the order of 6 milliseconds.

The special features of the model 7702 include the following:
*A patch select control, which activates a preselected patch made between the control voltage output jacks of the analyzer section and the voltage controlled amplifier input jacks of the synthesizer section to generate special effects (such as the "Donald Duck" effect). The preselected patch is activated either by actuating a toggle switch on the front panel or a pedal switch plugged into a rear panel receptacle.

*A sample/hold (or track/hold) control, holding a given sound spectrum (for instance a vowel or an instrument sound) entered into the Voice input when actuating a toggle switch on the front panel or a pedal switch plugged into a rear panel receptacle.

*A Vocoder bypass, either activated by a toggle switch on the front panel or by a pedal switch plugged into a rear panel receptacle.

Other features and controls include:

The Bode Vocoder employs the latest technology. Due to the absence of any trim adjustments in the entire 16 channel vocoding section extreme reliability is assured. The signal-to-noise ratio of this instrument is better than 60 db the carrier feedthrough is below the noise threshold and the harmonic distortion is extremely low.

The model 7702 has high impedance line inputs and a low impedance output. The instrument is self contained] with built-in power supply, switcheable to 115 or 230 volts A.C., 60 or 50 Hz line. The Vocoder features standard rack mounting. The front panel size is 7" x 19", and the depth is 12" without the controls.

The Melodium
Designed by Harald Bode and shown in 1938. The Melodium was a monophonic touch sensitive keyboard instrument, the Melodium was developed with the assistance of Oskar Vierling. The device provided for a pedal for vibrato and a tuning/transposition knob.

The Melochord
Harald Bode built the electronic Melochord between 1947 and 1949. It is a monophonic keyboard instrument using pitches derived from the traditional 12 note scale with switches extending the 37 note range from three octaves to seven. A foot pedal allowed overall control of the volume. An envelope shaper could be triggered for each key. Later there were two keyboards; the second controlled the timbre of the other, a technique used in later modular type synthesizers. This device was used extensively in the electronic studio at Bonn University and at radio studios in Koln, and was used by many electronic music artists including Stockhausen.