How a Monitor and Camera Work: The Scanning Process

Raster refers to the scanned cathode ray tube (CRT); it appears as a rectangular block of light.  The picture tube of a television receiver or monitor is a CRT and the display of an oscilloscope is also a CRT.  The raster is produced by the electron beam inside the tube moving horizontally and slightly downward to create 525 blank lines when there is no video input.  The horizontal and vertical motion is called scanning.

The following description refers to the standard 525 line system used in the US.  The process is similar for most video equipment but the numbers indicated may be different for different machines and in different countries.


Video is a series of still information which is displayed so rapidly that, due to persistence of vision, the eye and brain perceive motion.

The scanning process produces a raster by drawing 525 horizontal lines across and down the screen. The drawing is done by a beam of electrons. The beam first scans each of the 262 1/2 odd lines across and slightly down the screen (one field) and then returns to the top and scans each of the 262 1/2 even lines between the odd lines (one field) to compose one Frame of 525 lines or the raster.

The beam begins to scan at the top left on the first odd line and moves horizontally and slightly downward to the right edge. This one line is called a trace. The beam then returns from the right to the left at the next odd line to begin a new trace. The return portion of the beam is not seen because it is blanked out by a blanking pulse. The return portion of the beam is called the retrace. The scanning of each of the 262 1/2 odd lines continues in this manner to the bottom of the rectangle. It takes 1/6Oth of one second to complete the scanning of all the odd lines, when the beam reaches the bottom of the screen it must return to the top to begin the scanning process for all the even lines. The return of the beam from the bottom to the top is also blanked out so it is not seen. The 262 1/2 odd lines which are scanned make up one field.

When the beam has returned to the top, scanning of the even lines begins. The process is the same as the one for odd lines except that only even lines are scanned. The alternation of odd and even lines is called, interlaced scanning. For each horizontal line the beam moves across from left to right and slightly down then back to the left side again (the retrace) to begin the next even line. At the bottom the beam again returns to the top while the screen is blanked out and the beam is ready to scan odd lines. The 262 1/2 even lines which are scanned also make up one field and take 1/60th of one second.

The odd field and the even field together comprise one frame of 525 horizontal lines. There are 30 frames displayed every second (frame frequency) or 60 fields displayed every second (field frequency). In each second there are a total of 15,750 lines: 1 frame=525 lines, 30 frames per second -  30 x 525 = 15,750 lines per second. This is called line frequency.

The scanning process occurs in both the camera and the monitor and must be regulated so that the process happens at exactly the same time and at the same rate for both. This timing is accomplished by sync pulses (see below). 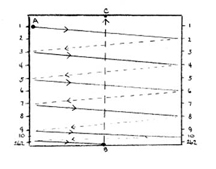 trace begins at A
trace moves A to 2 left to right
retrace moves 2 to 3  right to left
when trace reaches B, beam moves from B to C and is blanked out 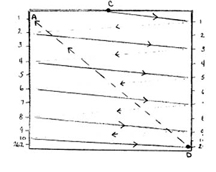 retrace moves C to 1  left to right
retrace moves 1 to 2 right to left
when trace reaches D, beam moves back to A (blanked out) 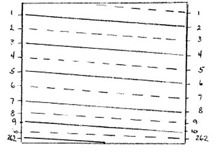 broken lines are even traces
retraces are not shown
MONITOR

Monitor:  video signal goes directly into this to display the image

Receiver:  video signal must be converted to RF (radio frequency) before it can be displayed. A cable from RF output of the camera or deck is attached to the antenna leads of a television set (receiver).

The screen is coated with a fluorescent material which releases light when hit by electrons; the more electrons which hit the material, the more light is released. The video signal sent from the camera is composed of fluctuations in voltage. A positive voltage produced by the camera by the presence of light will open the control grid and allow more electrons to pass, brightening the screen. A negative voltage produced by the camera in the absence of light will close the control grid, allowing fewer electrons to pass and. darkening the screen.

Thus in one trace there can be many variations of relative light and dark. 525 traces, each with its variations, compose a mosaic of lights and darks which can be perceived as an image

Light is reflected by an object and enters the camera through the aperture opening of the lens.  Light falls on the camera tube (usually a vidicon tube).  The target is that section of the tube sensitive to light (photosensitive).  The light causes electrons to be emitted producing areas of positive charge; the more light, the more electrons emitted and the greater the number of positively charged areas.

The cathode emits a beam of electrons in the direction of the target.  This beam sweeps the target from left to right horizontally and slightly down in the same manner as the monitor scans and at the same rate.  The deflection coils move the deflection beam horizontally across the target and vertically from top to bottom and back up during the entire scanning process.  As the beam scans the target the areas of negative charge produced by light hitting these areas attract the negatively charged electrons while those areas of negatively charged electrons while those areas of negative charge produced by less light do not attract the electrons.  Thus the number of returning electrons varies with the number of positive charges on the target. If th target has many areas of positive charge (indicating the presence of light), fewer electrons return.  If the target has few positive charges (indicating the absence of light), more electrons return.  The beam electrons then produce a fluctuating voltage which is called the current of video frequency.  Positive voltage is created by brighter areas and negative voltage is created by darker areas.  Within each trace there can be many variations of light and dark, thus many areas of positive and negative charge.  This voltage is then sent from the camera to the deck to be recorded or to the monitor to be displayed.

The camera converts variations in light to fluctuations in voltage.  This signal is sent to the monitor to be converted back to variations of light and dark.

Representative of one trace.  Horizontal sync to begin trace. Video signal fluctuations to compose the trace

Representative of one field

Vertical sync pulse to begin next field
Video signal fluctuations to compose each trace
Blanking pulse: prevents visibility of retrace, when beam returns from right to left to begin scanning of next line and when beam returns to top after field is scanned.

Synchronization: to be contemporary with.

Refers to the process which maintains the timing and the rate of the scanning process.  It insures that both the camera and the monitor begin to scan simultaneously, begin each line and field at the same time and that the rate for both is the same.  If sync were not present, the image displayed on the monitor would not be readable as an image.  In any video system there must be a sync source.  In a single camera system, sync may be generated by the camera or by the deck, but not by both at the same time.  In a multiple camera system, the cameras must have one common sync source; usually the sync is generated by a sync generator within the video mixing machine.  A separate sync generator may also be used.  Sync pulses are produced by oscillators oscillating at specific frequencies.

There are two elements to sync:
horizontal sync maintains the side to side orientation. Loss produces diagonal lines.

There are two types of sync:

random sync where only horizontal sync is supplied; this results in traces on the monitor which are not evenly spaced

2: 1 sync or interlace wherein the traces are evenly spaced

Sync pulses are also recorded on video tape along with video information so that on playback the sync track is read by the monitor and the image displayed approximated the image the camera recorded.


A horizontal sync pulse is generated at the beginning of each horizontal trace.

A vertical sync pulse is generated between fields