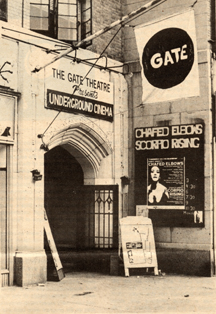 My first theatrical experience took place when I danced inside a five-foot papier mache screw Topped with a U.S. flag at the entrance of the Museum of Modern Art in New York City on 12 July, 1962.  While I danced, accompanied by three teen-age Puerto Rican rock-and-roll singers, Aldo Tamellini presented the museum with the Award of the Golden Screw.

A short time later Aldo opened "The Center" in a small loft in the Lower East Side of New York.  From that point on, I found myself involved in a series of varied theatrical situations.  At The Center Aldo presented jazz concerts, poetry readings and an open discussion with Julien Beck and Judith Molina on "Revolution as an Alternative".  We were closely associated with a group of black poets who had recently come to the Lower East Side from Harlem, Bedford Stuyvesant and the south.  It was from them, and from Aldo who was staging a one-man opposition to the gallery and museum system, that I had my first brutal realization of what it means to speak the truth in a land where truth is suppressed.  It was clear that the establishment, which posed as a synthetic avant-garde, existed only to crush the development of any new forms of creativity.  It was clear that no "cultural organizations" or philanthropists channeled monies for the free enterprise of creative people.  It was obvious that the so-called "cultural elite" who swallowed the establishment's line had to be bypassed.

There was no scene in the East Village then.  But there was a beginning of a new subculture of creativity.  Where could this subculture go when the wealthy society which controlled the establishment rejected it?  Our answer was: to the streets, to the squares, to the churches ﾖ to the public at large.  And that's where we went

The reputation of The Center came to the attention of LENA (Lower East Side Neighborhood Association).  I proposed a festival of the arts that would bring the artists of the Lower East Side out into the open.  St. Mark's-in-the-Bouwery Church was offered, and I organized a two-week marathon of poetry, underground films, an exhibit of painting and sculpture and jazz concerts in their outdoor cemetery.  The festival was packed, and from that time on the Lower East Side was acknowledged as the home of a new generation of artists.

St Mark's Church became our new center in October 1963.  Aldo selected the largest sculpture show ever independently organized in New York City.  Forty living U.S. sculptors were brought together with work ranging from forty-foot-high pieces to small indoor works and drawings.  World-famous artists were exhibited next to totally unknown ones.  It was another way of bypassing the establishment.

In 1964 Aldo became involved with projection.  I was his assistant projectionist, and have since participated fully in all of the intermedia events which he presented.  The loft where we lived and worked looked more and more like a total theatre.  He worked with dancers, musicians, poets, composers, hand-painted slides and film, and a huge variety of other sound and light equipment.  I was his trouble-shooter, mediator, liaison, press representative, technician and general coordinator of all the elements and materials he needed for his work.  The words "intermedia" and "Mixed Media" did not exist at that time.  Aldo was an originator of a form which did not even have a vocabulary, and it was a challenge to try to describe it to the theatres, press and all the people who were to become involved with the presentation of his work.

One of the most grandiose theatrical experiences I can remember was Aldo's Black Round which was performed at the wading pool of Washington Square Park (then dry because of the water shortage) while he projected hand-painted slides on a huge screen in the middle of the fountain, thirty of us wearing gas masks., carrying flashlights and an assortment of sculptural objects pierced the enormous crowd of people which had formed a solid mass of bodies around the rim of the pool.  That night the city was our theatre and the endless variations of people who gather in the park our audience.

The next thing I knew, I was asked to be co-producer of The Bridge, a small experimental theatre on St Mark's Place.  It was then that I became involved with underground film-making, and the public was just becoming aware that something else besides a Hollywood film could be seen.  Yet I was amazed at the prejudice maintained by the press ﾖ a situation which still exists.  To this day the editors of The New Yorker magazine refuse to list films exhibited in underground theatres.  Even Andrew Sarris of The Village Voice, stated, in a discussion held at the Bridge, that a film was not worthy of consideration, unless it was at least one hour and a half long, thus categorically excluding 90% of experimental U.S. cinema.  I held press screenings for our film programs, but the critics of the larger papers were no better.  For a while anything less than feature length was not worthy of a reporter.  Finally, they began to acknowledge at least our presence and "human interest stories" appeared in their publications.  It is only recently that there has been any attempt to deal with a few films on the basis of their creative form.  Even now the critics remain totally baffled.

Last September I opened The Gate Theatre.  At first I concentrated on underground films.  As our audience grew I found that I could show our programs seven times a day, seven days a week.  Then in March, Aldo and Otto Piene founded the Black Gate, the first Electromedia Theater in New York, above the auditorium where the films were being shown.  The Gate Theater became a multiple event.  For the first time a theatre offered both underground films and Electromedia, the newest development in the creative arts and offered them both simultaneously.

To be involved in the underground whether it is in a church, a loft or a theater, is to function in an environment saturated with controversy.  One is never sure when subject matter (political or social) or revolutions in artistic form and structure, will place everything in a state of jeopardy.  This usually happens when the material offered drastically challenges the mass media image of "the good American life."  Sometimes, rather subtly, there is a rash of city inspectors and policemen who think they can find some technical way to close our doors.  Exit signs, fire extinguishers, electrical wiring are checked and rechecked a million times, and the harassment of simply taking the inspectors on tour is apt to throw everything into a state of confusion.  At other times, war is openly declared.  A three-month battle was waged with the Department of Licenses over the burning of a U.S. flag which took place during an evening of Intermedia at the Bridge.  The exhibition of Brothel, and Underground exhibition of Brothel, an Underground Film shown at The Gate, threatened to put me in jail.  In each case the battle was fought on the grounds of freedom of expression in the arts.

Artistic expression is, after all, made up of truths put into some kind of form for the stimulation of man.  In our compartmentalized society, in which every aspect of life, even art itself, is controlled by the merchandizing of products, it has become a necessity for creative man with something to say to find a direct route to the public.  At present, one of the most important vehicles of this route is theatre.  The Gate's audiences, young and old, educated and uneducated, come to take part in the excitement of a new experience.  They may not always understand what they see and hear, but they are exposed and the direct link between the artist and the public is immediately established.