The Electron Movers: Research in the Electronic Arts, Inc.

The Electron Movers, Research in the Electronic Arts, Inc. is an organization of video artists involved with the establishment and exploration of the electronic arts as an art and communications medium. The group of five artists came together because of common aesthetic interests and the need for collaboration on works and performances.

But perhaps the greatest need that is fulfilled by the group concerns the opportunity for artists to interact and grow from each other's experiences. A distribution of responsibilities makes it easier for each individual to have more time to pursue his or her own personal work.

Emphasis is placed on learning processes and perceptual development within the group and particularly in certain pieces that the group executes. They are not concerned with the established narrative formats of the communications media, but with the establishment of new language systems.

Video is eclectic in nature-it is a combination of many modes of operation from other media. Video can "look like" and assume the aesthetics of drawing, painting, sculpture, and film and it is all these things. Video in combination with other media can produce something entirely different than any one of them alone. The Electron Movers are exploring the intersections of these many disciplines.

For example, the group's basic approach to dance-video was first to acquaint the video artists with dance techniques and ideologies, and then to acquaint the dancer with television technology and the process of working with a space that was confined to the two dimensional television monitor. When a common understanding was reached, the two aesthetics were combined. In combination, dance and video become a separate entity.

They have also dealt with painting-video rather intensely. They realized that in viewing a painting, one sees the final product of an evocative real time process, the evolution of which is not apparent. The elemental stages through which the painting progresses are never seen except in the painting's final form. Since the video system has the capability of recording real time sound and image, it is particularly well suited to the recording of a process which is, just as in the painting, the realization of an idea.

Organizing images in time invites parallels to musical composition; images as well as sounds have certain connotations, timbre, and dynamics, with respect to duration.

Laurie McDonald has addressed herself to the differences in perceiving sound and image. Video deals with the organization of images in time on a two dimensional surface whereas sound is onni-directional and can evoke entirely different spaces apart from the environment in which it is presented. This is the particular element that separates the sound from the image.

One problem in using both image and sound is that when the sound and video are both coming from the television monitor, sound reproduction is unsatisfactory. However, when an adequate sound system is utilized, the sound tends to overpower the image produced by the monitor.

One of Laurie's involvements in the electronic arts has been to find unifying elements between sound and image. Video sound sculptures is one solution. The idea is to take the video image out of its confining monitor space in order to evoke other spaces. One of her proposed ideas is to build four polyhedral structures out of of half-silvered mirrors. A number of color monitors would be placed inside of each structure. When viewed in a dark room, the effect would be an infinity of imagery from some angles and from others a kaleidoscope of kinetic light. These polyhedral structures could be viewed from any position in the room and the imagery would be entirely different from-each point. Her quadrophonic electronic music compositions would complement the spatial effect. The option for many audiovisual directions is opened by the alteration of the image in such a fashion, and by the deviation from a one focal point image source.

Dennis Hlynsky deals with the property of video that involves the constant changing of present tenses into past tenses, and the use of video as a kinetic graphic surface.

Although video is an excellent device for the documentary, it is also a medium which fuses images in a way that enables the viewer to see them abstractly as concepts, not as tools for narrative story telling. It allows the illusive to become concrete. By the nature of the technology, visual images recorded by the video system can then be made into graphic shapes and those shapes reformed into other images. In experimental video the artist structures graphic images directly to his own personal experience.

Dennis also deals with video sculpture but in an entirely different realm. He is intrigued by concepts endemic to the video system's shaping of reality such as the fact that an image of a human form which appears to be about four inches high on the television monitor is without doubt a two-hundred and fifty pound football player. Dennis also has worked with the image displayed on a number of monitors, with the image moving horizontally from edge. to edge. The viewer sees those images as a motion which continues through tile negative space between monitors, and defines the space by the viewer's imagination.

Alan Powell has been working with electronically generated images created by video feedback and simple oscillation of the signal. A piece entitled Feedback No. I was started in June of 1972. At that time he was taking the feedback monitors and placing mirrors and reflective materials across and around its face. He finally arrived at a solution for certain design patterns by placing a large two by three foot mirror vertically on the left side of' the face and a three by four foot mirror diagonally across tile face of the mirror. By hand holding a small portapak camera with a zoom lens, he achieved a multitude of designs. The designs that intrigued him most were those that resembled pulsating organic forms. By careful manipulation of zoom and camera position lie could make transitions from one image to another.

In early July he produced a black and white feedback tape to a composition by Xenakis. In October of 1972 he took this same tape and played it on a number of monitors. The monitors were placed on their sides, upside down, and right side up. Cameras mixed the images from these monitors while additional cameras were doing feedback off the master monitor. By the use of a keyer, Alan was able to achieve glass-like transparencies.

In the Video Maze "there are twelve modules, each of them engaging the participant in a different perceptual activity as he/she progresses through the Maze."

The group has had a great deal of success in collaboration pieces, and have organized their more performance oriented pieces into what they call the Video Maze. It is literally a maze that participants walk through and where they rnay involve themselves in various video "games." There are twelve modules, each of them engaging the participant in a different perceptual activity as lie/she progresses through the Maze. Upon entering the Video Maze one is confronted by a color monitor displaying video feedback produced in another section of the Maze by someone else manipulating a camera pointing into a monitor. In another part of the Maze, a small drawing of the interior of a room was monitored in an actual room sized cubicle. When a person stood in the cubicle his image was imposed on the drawing by means of a camera. Therefore a new environment was created for the viewer which enabled him to experiment with monitor space. Dunking for apples, using a hydrophone (underwater microphone) to monitor the produced sounds, was another part of the maze.

"Video in combination with other media can produce something entirely different than any one of them alone."

The five members of The Electron Movers bring to video thorough backgrounds in many disciplines.

Robert Jungels comes to video with -a literary background. He attended Iowa State's writer's workshop and edited a poetry magazine in Chicago. He went to the Rhode Island School of Design in 1963 to team teach a course in design and later involved himself in filmmaking, photography, and television. He had his own own television show in Boston that dealt with art and design. In 1971 he began an experimental television studio at the Rhode Island School of Design.

Dorothy Jungels comes from a visual arts and dance background. She has done printmakin-, sculpture, puppetry, ballet, and modern dance. In 1973 Dorothy became involved in the integration of video and dance. She had been teaching and documenting dance techniques by means of video through the Rhode Island State Council oil the Arts. From her artistic experience she created a series of pieces with other artists that brought dance and video together in a new language.

Laurie McDonald has a background in musical and visual arts with many years of formal musical training and a degree from the Rhode Island School of Design. In 1971 Laurie started experimenting with film and its relation to musical composition. She eventually involved herself with experimental video and electronic music. Much of her work is realized on the Moog, Arp, and Buchla synthesizers. She has had many shows of her video work in the United States and Canada.

Dennis Hlynsky comes from a visual arts background. He works with drawing, graphics, and photography in addition to video. His work is a balance between a -visual exploration of graphic space and his own private realities. He is the 1974 recipient of the Grants in Aid to Individual Artists by the Rhode Island State Council on the Arts. He is also a graduate of the Rhode Island School of Design.

Alan Powell comes from a formal visual arts background. He spent many years exploring tile sculpture, painting, drawing, and film media. His major concentration is the creation of environments which alter or redirect the viewer's perception. These environments were recreated on paper, canvas, three-dimensionally, and with video. In 1971 Alan began using video to explore and reprocess tile environment in which lie lives. He now holds a fellowship from the National Endowment for the Arts. 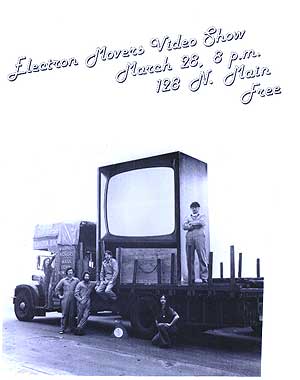