Design and Operation of the Spatial and Intensity Digitizer

Description
The Satial and Intensity Digitizer or "SAID", arose from an early attempt to create a low cost video-speed Analog to Digital converter (A/ D). In 1976 no monolithic silicon A/D converters existed, and the cost of equivalent industrial modules was outside the range of most video art budgets. As this component was basic to digital video processing, a 6 bit A/D converter was attempted. An A/D converter of 4 bits or less was commonly constructed using strings of high speed comparators, but resolutions greater than 4 bits was difficult to perfect.

A video A/D converter is built from three main components. A sample and hold input amplifier, an analog to digital conversion circuit, followed by a binary encoding stage to generate a unique binary number for each of the analog to digital thresholds. The sample and hold amplifier picks out a sample of the video voltage, and holds its value until it is fully converted into digital form. The conversion from an analog voltage to a digital value is followed by the binary encoder that develops a digital output as a stream of 6 bit binary numbers, representing 64 video grey values.

The total conversion time of all elements determines the highest clock speed possible. The conversion time was slower than desired, so a horizontally locked oscillator was used to slow down the clock rate until the conversion was stable. This was generalized to allow wide variation of oscillator speed to horizontally sample the image. The output of the A/D converter is fed to a companion Digital to Analog converter of 6 bit resolution, completing the conversion process from analog to digital then back to analog.

The purpose of this circuit is to digitize the video signal into numerous digital thresholds and then sample them along the horizontal time axis to create vertical strips. The spacing or width of the vertical strips of video is adjustable through an oscillator knob. A switch to turn off selected digital bits is also available. This is an early example of the "posterize" function (bit selection), while the stripes are the horizontal component of a "mosaic" function, both found in digital video effect devices.

McArthur SAID
The McArthur Spatial and Intensity Digitizer
This video processing device was one of the first prototypes for digital video at the Experimental Television Center. Until a unit of new design is built as a synthesizer module, this prototype is available for experimentation. Its basic function is to break the image into tiny squares, the number of squares (resolution) being controlled by the rate knob.
It is only necessary to connect a video input and output to use the SAID, but it is necessary to pass the output through an output amplifier before recording. This is no problem with the SAID patched into the main synthesizer.

The SAID controls are touchy; you should just play with it to get a feeling for the controls. Certain knobs must be set properly relative to each other to obtain a presentable image. No voltage control inputs are available. Although a color video signal may be input, the output of the SAID is always black and white video.
McArthur SAID
From Experimental Television Center Studio Manual, 1980
Sherry Miller Hocking and Richard Brewster with Peer Bode, Hank Rudolph and Matt Sch,langer

The Spatial and Intensity Digitizer, exhibited at the Video History: Making Connections conference, 1998 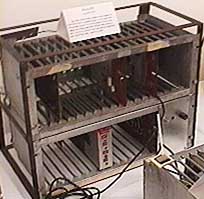