Components of the Remastering System

Devices for monitoring and switching

The transfer process, at its simplest, requires:

Ideally, you will also have devices for monitoring, generating bars and tone, maintaining a stable signal and doing audio or video processing. These devices are discussed in later sections.

The remastering process requires additional equipment to give the operator the opportunity to monitor and to transfer the tape efficiently. At BAVC, this equipment includes:

BAVC also has a color bars generator, a device that outputs a standard bars signal, and a tone generator. These devices are used as sources for the bars and tone recorded on the beginning of a transferred tape, to provide reference signals for color, black, and audio levels.

Bars are a video signal recorded at the head of a tape. At BAVC the signal is typically recorded for 1 minute simultaneously with an audio tone. The colors in the bars are used to adjust a TBC to the incoming tape's signal. Because of this, the video signal on the rest of the recording should have a close correspondence, in hue, saturation, brightness and black level, to the bars reference signal at the beginning.

Tone is recorded along with the bars and is 1 kiloHertz. Because the audio vu meters on the recording machine are adjusted to the tone, the audio on the rest of the program should correspond with the reference tone at the beginning.

Time base correctors and the Sony BVT-810

A videotape machine mechanically scans the tape using a rotating tape head. This function introduces errors in the signal, known as time base errors. These are recorded on the tape and are prevalent in small formats like 1/2" open reel and U-matic.

To correct these errors, a digital device called a time base corrector or TBC was developed in the mid-1970s. The output of a videotape machine is sent to the input of the TBC. The TBC writes the unstable signal into a memory buffer and reads it out, stabilizing it with its own crystal-stable clock. It is like capturing a frame of video, or a portion of a frame, stabilizing it and instantaneously sending that frame to the video out. The TBC then does it all over and over again faster, than 30 frames per second. Older TBC would handle 16 lines at a time. Today most external TBCs are also frame buffers, and are known as full frame TBCs. Because these devices have a frame buffer built in, manufacturers usually add image processing features like freeze frame and strobe.

While correcting time base errors is the primary purpose of TBCs, they also perform another vital function. TBCs provide controls for changing the brightness, contrast, hue and color saturation of a video signal. On the control panel, these functions are usually identified as Luma (brightness), Setup (contrast), Hue (color) and Chroma (saturation).

The DPS TBC is a full frame TBC that is designed to either be mounted in an ISA expansion slot of a PC or Amiga and controlled through software or in a DPS control box with external control switches and buttons.

BAVC chose the DPS TBC because of its functions and price. Early attempts by BAVC to use a much more expensive TBC (Prime Image 600+) with 1/2" open reel had been unsuccessful. The DPS TBC has worked well as an alternative to the BVT-810.

Because it is a full frame TBC, the DPS requires only a video input connection to the source video tape machine. Unlike the BVT-810, this TBC will work correctly with a video signal coming from the CV-2100.

BAVC's DPS TBC is mounted in a DPS box along with a DPS Vscope, a card that provides vectorscope and waveform monitoring.

The typical use for the waveform monitor is to indicate the brightness and darkness of the video image. It measures the "original" video signal, the monochrome signal that we identify with Ernie Kovacs and Howdy Doody. The waveform monitor has horizontal lines etched on its screen, each line representing IRE units named after Institute of Radio Engineers. 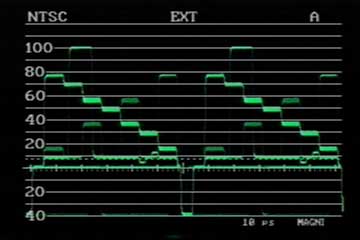 A legal broadcast video signal ranges from -40 IRE at the bottom of the waveform monitor screen to 100 IRE at the top. The only part of this range that represents visible video is from 7.5 IRE to 100 IRE. One third of the useable video spectrum is not visible, and has been set aside for keeping the video image in sync.

This is a very basic use for the waveform monitor, but perfect for transferring 1/2" open reel and U-matic. Waveform monitors are also used to "time" the horizontal sync of older composite online editing suites, verify time code phase and measure parts of the video signal with engineering names like the breezeway, the back porch, and the front porch.

Sherry Miller Hocking's "Principles of Image Processing - Sync" on the Video History Site  gives a detailed description of the sync signal and its component parts.

The vectorscope is optimized to display the color information of the video signal. Six boxes with crosshairs are located at specific points on its display screen. When a color bars signal is passed to the vectorscope and the signal is calibrated and oriented properly, six points in the video signal will land on each of the crosshairs. On the screen, next to the box/crosshairs are labels R, Mg, B, Cy, G, Yl. These mark the color associated with each box/crosshairs: Red, Magenta, Blue, Cyan, Green and Yellow. 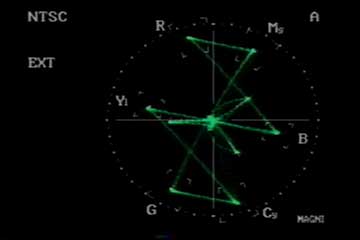 Like the waveform monitor, the vectorscope is only for monitoring. Changing the chroma setting on a TBC which then sends a signal to the vectorscope will cause the signal on screen to stretch out towards the edges of the display. Adjusting the hue on the TBC causes the video signal on the vectorscope to spin. Red travels towards Magenta or Yellow. The colors change.

Traditional waveform monitors and vectorscopes come in separate instrument cases, have green displays and resemble oscilloscopes. BAVC's center uses a waveform monitor/vectorscope called the Vscope by DPS. This device is an expansion card that will fit in a PC with an ISA slot or in an Amiga. It mounts in the same DPS expansion box as the DPS TBC. The Vscope has a BNC monitor output that can be sent to a color monitor. On the color monitor, the Vscope display can be toggled on and off.

One good feature of the Vscope is that its levels cannot be adjusted. All too often not-so-clever fingers adjust the knobs on monitoring devices, taking them out of calibration. If there is a discrepancy between the video signal as viewed on the color monitor and the one that is shown on the waveform monitor and vectorscope, the waveform monitor and vectorscope are almost always right. The discrepancy should always be verified with a reliable color bars signal.

The video/audio switcher in BAVC's remastering center is a simple routing device with six buttons on the front. On the back of the switcher is a bank of connectors corresponding to each button, with one video and two audio inputs. Each of the tape machines' video and audio outputs are connected to one of the input banks, and the selected buttons sends the inputs to the one output of the switcher.

The purpose of a video switcher is to give the technician an efficient means Of switching among a number of devices; at BAVC we use the switcher to select among a number of playback decks. Without a switcher the technician would need to re-cable each deck every time the configuration changed. Initially when a 1/2" open reel tape is played back, the technician does not know whether it is "skip field" or EIAJ. Also, tapes play slightly differently on the two different EIAJ tape machines. As the tape is mounted on a tape machine, the tech need only select the switcher button corresponding to that machine to send the video signal to the TBCs and the monitor. When it comes time to do the transfer, the audio is patched to the audio input of the recording machine.

A video distribution amplifier multiplies the output of the switcher. This VDA takes one input (the switcher's output) and amplifies it and sends it to six outputs. These outputs are connected to the two TBCs and to the B Input of the monitor. One output on the VDA is unused. Now the signal of each tape machine can be viewed as it passes through the BVT-810, through the DPS TBC IV, and as it goes directly to the monitor. The technician has the opportunity to choose the best process for the video signal before doing the transfer.

BAVC's video/audio switcher and video distribution amplifier are made by Sigma. The two devices can be mounted in a Sigma rackmount tray, and they both take up only one rack space.

For almost everyone, the color monitor isthe portal to the images captured on tape. NTSC video is notoriously unstable. The standard NTSC is popularly known by video technicians as "Never The Same Color" As the messenger of the signal, the color monitor can offer technicians a wealth of information about the video signal as it plays back. if the monitors are maintained and correctly calibrated.

In a remastering setup, the color monitor should have at least 2 video inputs. One will receive the signal that is being processed through the video/audio switcher, VDA, TBCs and Vscope. The other signal should come directly out of the VDA, so that there is no TBC correction to tape signal.

The color monitor should have a cross pulse switch. This switch takes the video signal and re-centers it in the corner. The image is brightened and cut in two by the horizontal and vertical sync bars. In this mode the image is unrecognizable.

By viewing with the cross pulse switch activated you can analyze that large part of the video signal that is used for synchronization.

What will you see? If you are looking at a signal that is passing through a TBC, you should see clear, straight black bars in the center, one horizontal, one vertical. If there is a sync problem between the TBC and the originating video tape machine, vertical rolls may be very subtle. Viewing the signal in cross pulse will reveal the problem. Because the BAVC system allows switching between the same tape signal passing through different TBCs, the cross pulse view of the output will give you the information which will help you choose one TBC over another for the transfer.

The cross pulse switch is useful when viewing a signal on the second video input, as a signal that is not being corrected by a TBC. Without a TBC you will be able to see the skew errors, tracking problems, head switches. Essentially, you will see all the problems that are part of the sync on that tape. Once you know the problems, you will be able to better judge the course to take with the tape. Watching a tape without going through a TBC also gives you an early warning if the TBC is causing strobing or other problems associated with processing old tapes through TBCs.

The following is the logic behind BAVC's setup: 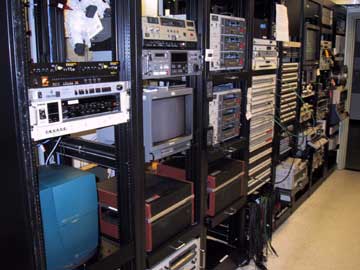 With these two design requirements, BAVC's remastering center is connected in this way:

6. VDA and audio to recorder

Appendix 12.2 shows block diagram of the signal flow in the system.

‹ Preservation Formats up Care of the Facility ›