Cloud Music was a mixed media installation developed by David Behrman, Bob Diamond and Robert Watts during 1974-1979. The installation consisted of a black and white camera which was pointed at the sky. A video analyzer allowed the user to position the placement of 6 crosshairs on the monitor of the sky image. The device generated six control voltages which were each proportional to the light value of the associated crosshair. As the light values of the passing clouds changed in passing across the crosshairs, the voltages changed. These changing voltages were sent to an electronic music system, which converted the changes to audio. Cloud Music was exhibited first at the Electric Gallery in Toronto (1974), then at the Experimental Television Center in Binghamton (1976), the San Francisco Art Institute (1977), the Whitney Museum (1979) and at the New Music America Festival in San Francisco (1981).

Poster for Cloud Music at the Experimental Television Center, 1976 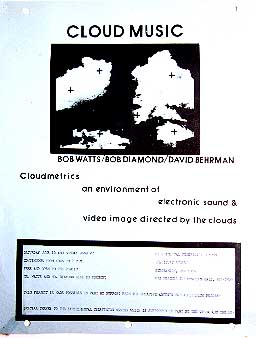 Robert Watts: Born in 1923, lives and works in Bangor, Pa. Since 1946 he has exhibited widely throughout Europe and the United States. The focus of his artistic endeavors has ranged from abstract expressionistic painting to mixed media performance to his present exploration in the area of sound and light.

"Since 1965, clouds, sounds, indeed the whole phenomenology of the natural environment has pervaded most aspects of my work. This present work (which I call 'Cloud Machine') has been evolving since 1966 when at Rutgers University we made some experiments with a sound device that reacted to changing light intensity on a movie screen."

At that time Watts saw applications to his interest in clouds and the changing light in the sky. He enlisted the help of David Behrman (audio solid state) and Bob Diamond (video solid state) to expedite his project.

Bob Diamond was able to produce a video system that could scan the clouds as they move by and produce a control voltage proportional to the brightness of the cloud at the scan point. This voltage is used to vary the environmental qualities of a space. Sound by David Behrman is produced by eight banks of audio-range function generators, four to a bank, each of which is tuned to a pre-selected four-part chord made up of pure modal or microtonal intervals.

The outputs from Bob Diamond's video analyzer are used to create an interweaving of slowly shifting, multi-layered harmony that parallels the movement of the clouds. Any harmonic change corresponds to a minute change in light of a cross hair in the video image.

According to David Behrman: "The technical means by which the passing clouds can be used to make music around a listener are of the 70's but the spirit of this project might be closer to the old outdoor wind and water driven musical instruments of Southeast Asia and Polynesia."

This fascinating exhibition will continue until Sunday December 1, 1974

INSTALLATION A: As a demonstration/environment suitable for colleges and universities for a period of two days or longer.

INSTALLATION B: An environment/performance suitable for any audience. One day installation required, performance one or more days.

BOB WATTS has been an exhibiting artist since 1951. He has degrees in engineering and art history, and is presently Professor of Art at Rutgers University, where he has received many research grants for work in electronic media and film. He has been associated with Fluxus since the early days, and together with George Brecht produced Yam Festival and Monday Night Letter. His work has been shown and performed around the world and is in many museums and private collections.

BOB DIAMOND is an engineer who has recently been involved with applications of electronic systems for artists. He has developed a computer system for WNET-TV 13, N.Y.C., in association with Nam June Paik. Since 1972 he has designed and produced custom video circuitry and holds several patents.

DAVID BEHRMAN is a well known electronic composer. He has long been associated with the Sonic Arts Union and has performed around the world with John Cage, David Tudor, Frederic Rzewski, and the Cunningham Dance Co. He was the producer of a series of contemporary music recordings with CBS. In recent years he has designed his own custom equipment for electronic music.

PLEASE ADDRESS ALL INQUMIES TO: