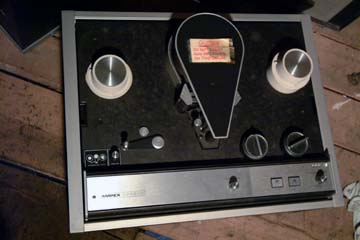 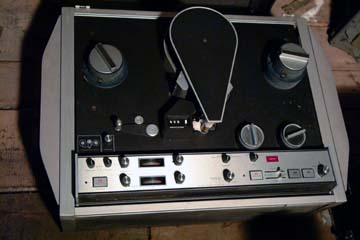 Ampex 7500
This deck is capable of recording and playing both low and high band, and is capable of a full 4.2 MHz video bandwidth. This is the first color-capable type A VTR, but it required specially modified monitors that could accept an external subcarrier reference. It was described as a portable, transistorized VTR capable of recording and playing back both B/W and color video signals. Two audio channels could be recorded from microphones or other audio sources. It is was used in closed circuit applications in the medical, educational, industrial, sports and entertainment fields.

Ampex VP 4900
This machine was designed specifically for in education, industry, government, and medicine, with a video response of 3 Mhz and a horizontal resolution of 300 lines. The video signal to noise ratio is 42 dB. A rotary transformer in the drum assembly provided increased reliability of signal transmission from the head, according to the company. Fast forward and rewind speed were each four minutes.

In 1964, TWA had a corner on In-Flight movies. The CEO of Continental
Called the Ampex VP of Engineering and asked if we could develop a videotape system for showing movies. The VP set down with me and we had a plan roughed out within an hour of the phone call from Continental. The VP wanted a single
large monitor in each cabin--just like the TWA system. I argued for individual monitors. We ended up with a compromise--which is what is common today.

I built a small box that converted the 28 volts DC aircraft power to 110
volts AC. This was the power source for the VR-660 helical videotape
recorder. Ampex bought several hundred small TV monitors that would be
mounted every other seat and on both the left and the right walls of the
airplane. The wiring and monitors were installed by a company that did a
poor job. There was crosstalk and RFI problems. Before this happened, I
was transferred to another Division of Ampex in another town and never did hear
how the crosstalk was handled.

I suspect that fiber-optic cables are used in today's In-Flight video
Systems so crosstalk is not an issue.

Another version of "In-Flight" video was developed by the U.S. military.
The U.S. Air Force installed a VR-660 in the tail area of every B-52 used in the
Vietnam war. It was connected to a video camera that was pointed down.
When a B-52 left Guam for a bombing run, the record button was activated. The
VR-660 would record for six hours. Most of the recording was over water but
it also showed what was actually bombed.

This is a good example of where archiving the entire 6 hour tape is not
desired. 5 hours of ocean is very boring to watch.

The source for this chronology of Ampex professional audio and video

celebrate the company's 25th anniversary. All dates not in square brackets

are from this document, as are all quotations unless otherwise noted. Any

dates given in square brackets are from another source, often the date on a

manual in my collection. Additional sources I have found helpful are a

chronology prepared by David Dintenfass, anecdotes about the Ampex 200A by

Larry Racies, and comments on the MR-70 by Bill Vermillion. My thanks also

to Russ Bleakley and, indirectly, John G. McKnight, for sending me the Fact

Book. I have also included other significant events in the company's

history. I drew the line at instrumentation recorders, computer equipment,

An overall chronology is first, followed by a discussion, in

chronological order, of some models of audio recorders.

1944 Nov. 1: Company founded as Ampex Electric and Manufacturing Company.
The name Ampex is derived from the initials of the company's founder,
Alexander M. Poniatoff, plus "ex" for excellence. [This is the party
line. An insider once told me that the "ex" actually stood for
"experimental."]

1946 May 2: Incorporated in California as Ampex Electric Corporation.

1948 Apr. 24: First production model 200A recorders delivered to ABC and
placed in service Apr. 25 across the country. First regular
professional use of magnetic recording. [The Germans don't count, I
guess.--hcs]

1954 May: Model 600 portable recorder for field use. It "retained full
master quality in a highly compact form." [No date given]: Models
3200-3300 high-speed duplicators.

1958 Model 351 audio recorder. [A flyer in my collection copyrighted 1962
refers to the 351's "four-year history of dependable operation by more
than 9,000 units."--hcs] Apr.: Color video tape recorder. [No model
no. given in Fact Book.] First demonstration of video tape editing.

[Spring 1976]: ATR-100 introduced at AES in Los Angeles. (Date from
Alastair Heaslett, who certainly ought to know.)

the Magnetophons. The 201 had the now-standard (except for cassettes)

oxide-in wind, had 300 heads mounted in an adaptor plate, and replacement

electronics configured to fit in the 200A's wire gutter. The 201 conversion

300. Both lacked monitor bridges, being designed with the same connectors

as the monitor equipment for the then-current Scully disc recording lathes.

real masterpiece of industrial design, hard to believe it was their first

effort, rivalled in this regard only by the MR-70. No built-in microphone

preamps. (Note: strictly speaking, there was no Model 200, though that is

the name generally used for this model. The first Ampex was really called

7.5/15 ips. Machines with serial numbers below 500 differed in many details

from those that followed: top plate solenoids were AC; the top plate was

plywood sandwiched between aluminum and stainless steel; there was no

stiffening "banjo" under the top plate; the cabinets of the console-mounted

machines looked like a miniature Model 200A cabinet. A great machine by any

standard. Available up to four track on half-inch tape. It was the 300

recorder later sold to Les Paul. This was the standard studio mastering

deck for decades. All the major studios owned them by the dozen. Most of

with the 300 transport is its indirect capstan drive. This design did not

increased with wear. The 300 transport was more than nineteen inches wide;

it had to be mounted vertically in a standard rack. The 300 transport was

also the basis for the 3200 duplicator and various instrumentation decks.

400 series: The worst Ampex, hands down, universally considered a

catastrophe. Two motors, capstan to the left of the heads. The electronics

are very similar to those of the 350.

had a four-pin Jones plug between the electronics and transport; the

octal tubes. Some people think the 350 has more headroom than the 351 owing

to an allegedly beefier bias oscillator. Two-track version available, but

maybe not right from the start. (?) The direct capstan drive of the 350

seven inch reels and operated at a single speed, either 3.75 or 7.5 ips

(field convertible with kit available from Ampex). No tape lifters at all!

six-pin Jones plug to connect the electronics and transport. The first

Ampex to be designed as either a stereo or mono machine from the beginning.

The front panel of the electronics, of which there are several versions, is

transfer" switch. Unlike the 350, the 351 electronics have an integral

power supply, printed circuit boards, and use miniature tubes. With the

350, the nicest of the smaller tube Ampexes. The most desirable of the

into one chassis, small VU meters and knobs, and a less-than-wonderful tube

complement. Hard to work on because of the cramped interior space, problems

quarter track playback head. Sound isn't as good (in my opinion!) as the

350 or 351, but still better than most transistor (including non-Ampex)

PR-10: A small, portable machine that used seven-inch reels and 354

electronics (with a different faceplate).

MR-70: Without any argument the best tube Ampex ever made, probably

the best analog tape deck ever made, period. This machine was an all-out

effort to make a cost-is-no-object, state of the art recorder. According to

a 1966 GSA price schedule in my collection, a two-track, quarter-inch MR-70

capacitors, etc., etc. Available in many track configurations, up to eight

preferred analog formats; some configurations were available only on

special order. It and the much-despised Model 400 series were the only

Ampexes before the ATR-100 to have constant tension. Completely mu-metal

100 made. Parts not shared with the 300 are scarce to the point of being

impossible to get. According to Bill Vermillion, a Studer engineer once

better than the MR-70. He tried for two decades; then came to the

conclusion that he could equal it but not surpass it. All-in-all, a

Fujii, "Performance and Reliability Requirements for a Master Tape

design. Microphone preamps plugged in to octal tube sockets and usually are

unchanged from the 350/351/354. Faceplate and control panel redesigned to

change on the transport now changes EQ automatically. Available with either

the three or four head headstack, like the 354. Locking level controls for

record and reproduce, as on the MR-70. Ampex offered a kit to upgrade tube

350 series machines to use AG-350 electronics. No built-in microphone

Available with up to 24 channels. No built-in microphone preamps.

AG-440: The workhorse of the transistor Ampexes. Available in

versions up to eight track on one-inch tape. Synchronous or servo capstan

in the MR-70's league. This machine took fourteen-inch reels and could be

field adjusted to operate at any two speeds from 3.75 ips through 30 ips

(note: speeds do not have to be adjacent). Specifications are at least an

rival those quoted for digital. Available up to 24 track on two-inch tape.

Later examples were assembled in Mexico. No built-in microphone preamps.

ATR-700: According to Mike Rivers approximately a TEAC 7030 with

ATR-800: The last of the Mohicans. Made in Japan by Tascam but an